Back with a bang: A record attendance on opening day of The Game Fair 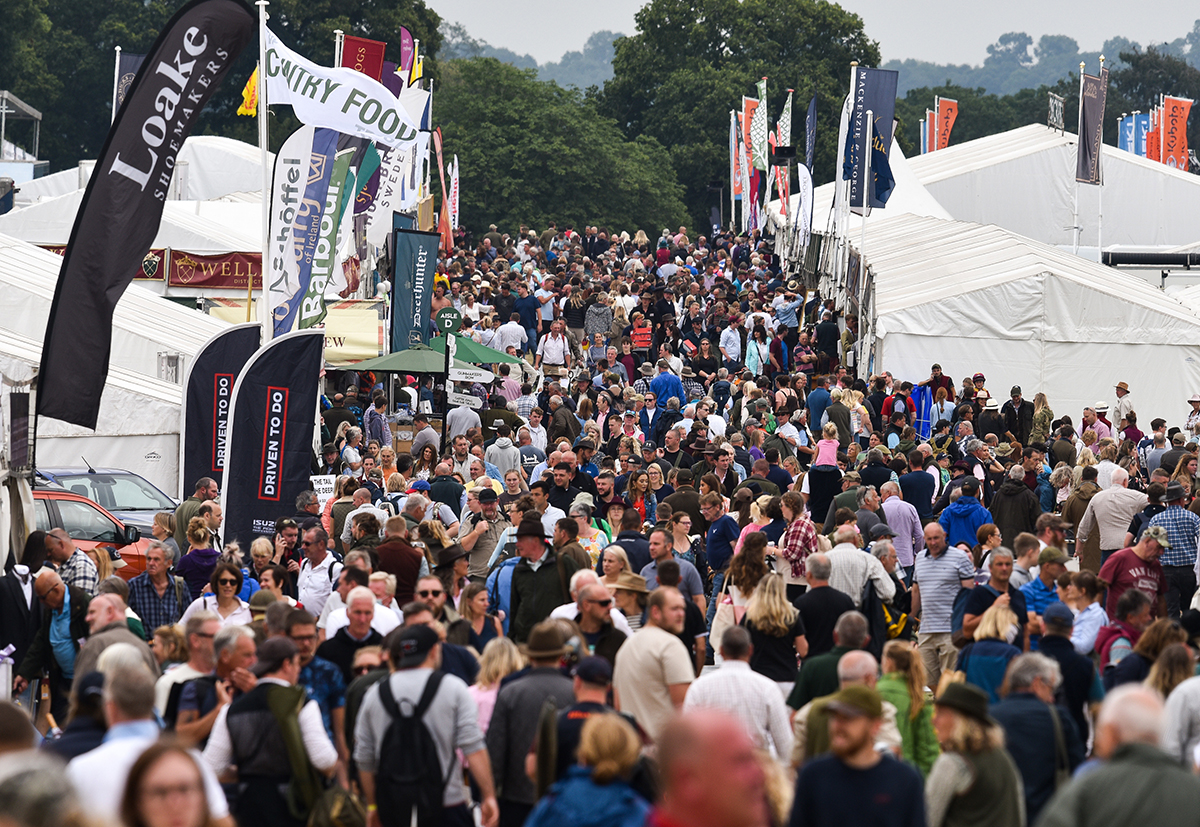 The Game Fair experienced the busiest ever opening day in its 62-year history, bringing a total of 119,378 people across all three days back together safely to enjoy the festival of the Great British countryside once again.

Following ‘Freedom Day’, The Game Fair was the first large-scale event in Britain. Despite forecasts of thunderstorms and torrential rain for Saturday and Sunday, but the weather was perfect, encouraging many visitors to stay until closing time on Sunday evening.

Among them were passionate countryside enthusiasts who return year after year to enjoy top-level shooting; the best gundog competitions in the country; the world of falconry, game cooking demonstrations and everything else that the much-loved event is renowned for – fishing, land management, gardens, equestrianism and traditional crafts … to name a few.

Suffolk-based Anna and Steve Greenside attended for a second time this year. They said: “We decided to camp for the whole weekend and make a holiday of it. We’ve been so lucky with the weather and the whole atmosphere has been incredible. We saw everything we wanted to – falconry displays; a demonstration on cooking partridge; the Shetland Pony Grand National – as well as putting a serious dent in our bank accounts thanks to a healthy dose of shopping!”

The show gave thousands of both city dwellers and rural regulars a unique chance to experience everything that the countryside has to offer and they lapped it up. Farmers and landowners also took a respite from their harvest to share the joy and community spirit, and gardeners spent hours happily browsing the event’s enormous show garden, built by students and staff from Pershore and Moreton Morrell Colleges.

The big spenders were out in force, with many exhibitors reporting record sales, particularly across art, sporting guns, clothing and accessories. More than £60 million is thought to have been spent. Many of the exhibitors are already booking their slot for the 2022 event, which returns to Ragley Hall for 2022, after a successful weekend showcasing their products in front of so many people.

Rob Fenwick, managing director of award-winning shooting ground E.J. Churchill, who organised the Shooting Line, commented: “Throughout the planning process leading up to The Game Fair, we’ve stayed in close contact with James Gower and the positive attitude from him and everyone else in The Game Fair team has made the experience as an exhibitor as smooth and pleasant as possible considering the uncertainty the events industry has been facing. We’ve launched a new gun: the E.J Churchill O/U Hercules which has actually been out for a year but we’ve been able to relaunch it at The Game Fair and engage with visitors once again. It’s been a great weekend. It’s so important for the shooting industry to have this event and we’re very glad to be back.”

Charles Ludlow, Dubarry of Ireland’s European event marketing manager, said: “It’s absolutely super to be back, we’re delighted to be here. I’ve almost lost my voice and feel like I’ve spoken to every single person who’s walked through the gate this weekend! It’s our first show in 18 months so we were able to show off some new boots and clothing at this year’s event which was our 21st Game Fair.”

Mark Osbourne, joint owner of gunmaker and sporting agency William Powell, which has been coming to The Game Fair for the past 31 years commented: “We launched two new models of side-by-side shotguns so the event was the ideal place to introduce them to visitors. I think everyone is pleased and excited to be back. I was worried it would only be the team at the party on Friday night but we had lots of people come along and I was really pleased to see so many people here across the weekend.”

BASC’s chief executive Ian Bell commented: “As an organisation, BASC has been coming to The Game Fair since the very beginning and after missing last year, I was so excited to come back. It’s been a fantastic Game Fair and the number of people who have visited has been really impressive. We’ve had a lot of engagement with our members who have come along to see us and we were able to launch Aim to Sustain: a formal partnership focused on the benefits of game shooting specifically to promote and protect the countryside. Planning for this year’s Game Fair required an added level of resilience in understanding things could change and we’d have to be ready for that but it’s been wonderful and we’re already looking ahead to 2022.”

Co-director of Callaghan Fine Paintings, Stella Callaghan said: “It’s amazing to be back here and to be able to see customers in person again. We’ve felt really encouraged by the response we’ve had and made some great sales across the board on sculptures as well as high-end and contemporary paintings. We decided to just go for it this year by adding a bar, having a party with a DJ and delicious canapés on Friday night. We offered hospitality across the weekend providing brunch, lunch and afternoon teas and that’s all gone down really well.”

London Gunmakers John Rigby & Co. made a big impact with their new stand for 2021. Managing director Marc Newton said: “I think The Game Fair is so quintessentially British and it’s important brands like Rigby and others like it are here to support this event. After everything that’s happened in the past 18 months, it’s so important to remember what we’re living for and it’s for wonderful traditions such as The Game Fair where people can get together; exhibitors, staff and visitors alike to celebrate the things they are passionate about and share that whole experience. We were excited to showcase our new safari tent along with the Rigby Land Rover and the response has been amazing. We actually sold one on the last day, so that was a great way to finish a fantastic Game Fair.”

This year’s Game Fair welcomed premium egg producer Clarence Court as this year’s Main Arena Sponsor. CEO Adrian Gott said: “We’ve been able to engage with a huge number of avid Clarence Court fans and it’s been great to introduce so many more people to the brand. We’ve also been able to showcase our boutique for the first time which has been really exciting. Even though it’s our first year we wanted to have as much impact as possible and to support The Game Fair as much as we could. It’s why we decided to not only sponsor the Main Arena but to also, have our own ‘Chook Chook’ visit the camp sites each morning offering Clarence Court eggs for breakfast, supply the Kitchen Theatre with eggs and serve delicious food on our stand throughout the weekend which continuously sold out!”

The Game Fair’s managing director James Gower said: “It’s been a huge amount of effort to actually get here with all the changing rules and regulations. However, we remained confident and we have an amazing industry supporting us. This year I’ve particularly enjoyed the new outdoor cinema, it was brilliant and we’d like to do more of those sorts of things. I’ve loved the party atmosphere this year, I think everyone wanted a release after the past 18 months and The Game Fair has provided that. It’s been wonderful to support The Country Food Trust as our official charity for this year, their on-site restaurant, Nice & Wild has been amazing. I believe they served around 500 breakfasts and even more lunches. The Enclosure restaurtant with James Martin was also incredibly popular and over the course of the weekend James cooked roughly 6,000 meals. We’re incredibly grateful for the support from all our sponsors this year who have helped to make The Game Fair 2021 such a success: Carter Jonas, Clarence Court, Cockburns, Grenadier, Isuzu, John Deere, Joules, Pulsar, Lincolnshire Game, Orion Markets, Raytrade UK, Skinner’s, Sporting Saint, TAG, Talasey, Tarmac, Viking, Weber and Welligogs.”

James added: “The local authority has also been very supportive and were in constant communication with us to provide guidance. I must also thank Lord and Lady Hertford for allowing us to hold The Game Fair in the stunning grounds of Ragley Hall, it’s the perfect venue for this event. I am excited and proud to be part of the wonderful collection of industries, business and communities that we serve, and I look forward to welcoming them all to Ragley Hall again next year.”